Today’s chart showing $VPLM‘s 218% increase… 12:30PM is when the excitement began as investors started getting wind of the decision records. We anticipate a press release from the company soon. The big question is, how much can the company get in damages? Its nice to know what you want and what you seek, but what you are offered and settled upon are 2 different things. The fact that it could be in the billions of dollars range is an eye opener. Just think what the company can do with that extra money? Disperse it to shareholders?  Reinvest in other businesses to increase shareholder value? The possibilities are endless and all positive. 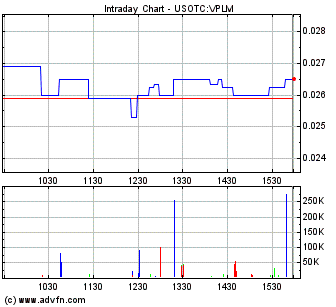 At a .07 close today the company now has an estimated market cap of $79 million dollars. If they even win a $1 billion from Apple, Verizon and AT&T total… that would put them near $1 a share! The funny thing is, they are going after them all for much much more than $1 billion. You do the math. This could be a lottery ticket for sure.

As you will read… The company also seeks damages against AT&T and Verizon that could bring billions more!

An award in Voip-Pal’s favor may also include additional punitive damages awarded by the court, up to triple damages increasing the newly revised potential maximum total award to Voip-Pal to over one hundred two billion dollars ($102,570,231,360).

Applying the updated damage award calculation method to Verizon and AT&T, the current damages sought from Verizon of more than two billion dollars($2,382,872,100) would increase to over seventeen billion dollars ($17,262,042,011).”

Emil Malak, CEO of Voip-Pal, stated, “This has been an extremely difficult 18-month long ordeal for our Company while we have been working diligently to successfully defend our patents against eight IPR petitions. We are fortunate to have the best technical and legal teams supporting us during this process. We are also extremely grateful to be represented by the best intellectual property attorneys, Knobbe Martens, who have stuck with us every step of the way for nearly eight years. We appreciate the support of our loyal shareholders during this difficult process.”

“Our strategy remains to pursue an amicable settlement in order to achieve monetization of our patent portfolio; we will keep everyone informed of our progress.”

“We would also like to wish our shareholders a very happy and healthy Thanksgiving.”

Voip-Pal.com Inc. (‘Voip-Pal’) is a publicly traded corporation (OTCQB: VPLM) incorporated in December of 1997 in the state of Nevada and headquartered in Bellevue, Washington. Voip-Pal is a technical leader in the broadband Voice-over-Internet Protocol (‘VoIP’) market with the ownership and continuing development of a portfolio of leading edge VoIP patents.

Shareholders anxiously await a possible settlement Lawsuit seeks $200 million in damages The potential for a 300%+ gain if the recent highs are re-reached Recently Filed 12(g) (15-12g)…What does it mean? Ownership in other public […]

Please navigate to Appearance → Widgets in your WordPress dashboard and add some widgets into the Sidebar widget area.